Musical Massage Sound Therapy was conceived when long-time musician and music therapist Dr. Maria McKinney was searching for a form of music that would assist people who were in the process of dying. Most people at this stage are fearful and hold regrets about incompletion in their lives.  This stress and fear makes the process of release into the spiritual body more difficult.  She was a participant in a group who frequently gathered to hear spiritual messages from Lama Sing through Al Miner of Florida.*  She posed the question to Lama Sing who provided basic instructions for the structure of the composition.

Over the next several months, Dr. McKinney researched the instructions further and composed the three variations that are now included on the CDs.  She had the music performed by live musicians in a sound studio and had the first audio cassettes recorded in 1989.  The music was performed by Maria McKinney, cellist, Dr. Dorothy Gundling, Maria's twin sister, on the violin and viola, and Nancy Joy Crane on the flute. 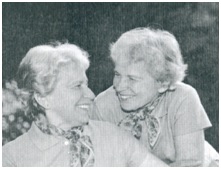 The musical instruments chosen for Musical Massage Sound Therapy have been known throughout history for their unique healing qualities. They include the flute and strings. The primary instrument is the cello whose size and reverberating chamber produces tones that freely resonate with the human body and provide overtones that resonate sympathetically with all aspects of the body. The flute provides an echo to the stringed instruments. Its higher and more pure tones tend to create a type of additional sympathetic resonance, which reverberates into deeper levels of the human psyche or outer reaches of the energy field.

The sacred scales of Gregorian chant form the basis for Musical Massage Sound Therapy (MMST). They are a rare combination of sounds that can provide harmony and balance to the energy field. The patterns are composed of a 3-part series of musical scales and variations interspersed with short periods of silence. The long straight tones, plus their resulting overtones and resonance facilitate healing and bring about a state of balance and regeneration. The silence between the tones allows the body time to ‘remember’ and tune to the vibrations.

According to Al Miner/Lama Sing, the ascending scale tones harmonize and stabilize the energy centers. The descending scale introduces the higher self, the eternal self or life-force energy.  The earth form and the eternal form become united in and around the body in a three-dimensional Star-of-David shape. Through its resonance and overtones, MMST generates sympathetic resonance that begins the healing process throughout the body.

As observed by medical intuitives, MMST also removes negative thought-forms (dull colors) and their destructive bodily effects. With a balanced, resonating field, the body is better able to heal itself. Dis-ease begins in the biofield before it can be seen in the physical body.